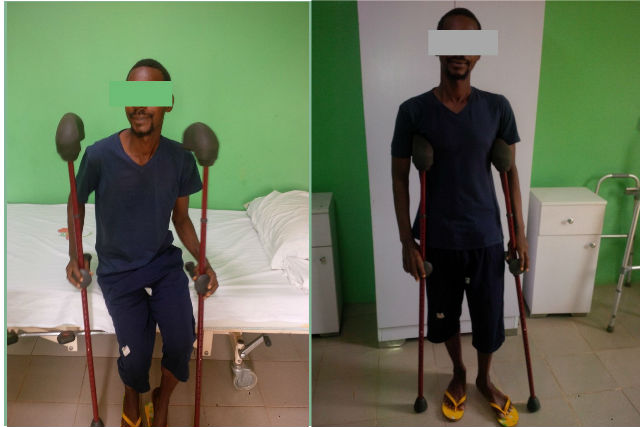 Mr.  O. GBENGA is male, 39years old graduate with OND, Christian who resides in Lagos, Yoruba. He was said to have been knocked down by a fast moving vehicle (“hit and run”). A GOOD SAMARITAN TOOK HIM TO A PRIVATE HEALTH FACILITY WHERE HE WAS BILLED THE SUM OF EIGHT HUNDRED AND FIFTY THOUSAND NAIRA with an initial deposit of Five Hundred Thousand Naira.  The patient unfortunately could not afford this huge medical bill as he is presently unemployed.

His case was brought to the attention of our organization, and he was immediately evacuated to our sister hospital, was unable to walk immediately; he was unconscious immediately, but regained consciousness later.

On examination, he was a young adult, poor hygienic, left thigh was swollen, tender with differential want; it was deformed, with inability of the patient to move the left lower lamb. There was crepitus, no history of craniofacial effluxes, no history of vomiting, no history of headache, no history of bleeding from any other parts of the body.

He was subsequently counselled and had open reduction and internal fixation with locked intra-medically nails.

He commenced gradual ambulation a week after the Surgery with the aid of a Clutch.

He was subsequently discharged two weeks after the Surgery and is currently on follow-up.

N:B   All expenses for patient management was borne by our organization.

Across The Creeks With Healthcare Day II